“Just Representations?” is a “piece” that was originally conceived to be part of the exhibition of impuls 2015‘s workshop Composition beyond Music at esc median kunst labor, Graz, Austria. at the opening, which took the form of a 1-hour performance, 7 participants, Mariella Bachmann, Shao-Wei Chou, Megan Ihnen, Helga Karen, Stefanie Mirwald, Benjamin O’Sullivan and Primož Sukic, were spread around the gallery, and using their smartphone’s cameras set to selfie mode, they stared at their own faces as they were reflected in their smartphone’s screens, while a sound collage made up of different representations of our physical and digital worlds was played from their smartphones’ loudspeakers. after the performance, the exhibition ran for 2 more days and “Just Representations?” was realized in a different version, in which the sound collage was only heard from one smartphone hung on one of the gallery’s walls, functioning as a mirror, but also as a “photo booth”. click here to read a review of the performance by Robert Winkler (in German). below are the photos that were taken by the visitors.

as i already planned the initiation of CompositionCloud before i participated in the workshop,1 it should not be too surprising that “Just Representations?” is both the last “piece” i created before i began to focus solely on CompositionCloud and the first (and for the moment, the only) “piece” i integrated into it. in fact, its 2 versions mentioned above – or 3, as i actually count the SoundCloud track as a third version of it – already demonstrate some of the modularity that CompositionCloud possess, which means that these different versions can be described as different combinations of the same components: the sound collage that was played on the smartphones; the activity of staring at oneself in the screen of a smartphone; and the notion of representations, which links between the sound collage (made up of representations) and the activity of staring at (the representation of) oneself.

moreover, these components (or components of these components) can also be linked to other ideas in CompositionCloud. first, there is the use of smartphones as sound producing objects, such as the iPhone 4 with the broken screen that produced a variation of filteredNoise2 in MUSIC FOR ONESELF v1, as well as the iPhone 4 mentioned in the collection objects4JamesSaunders, producing electromagnetic waves translated into sound by a radio. second, the collage structure is evident in CompositionCloud both at a local level, for example, in the structure of the video etv-HK_Rg and as a possible way to approach interpreting diagrams in d1-7_sxschVR-Nikel, and at a global level, that is, in the way ideas co-exist in CompositionCloud, resembling an ever-changing conglomeration, a dynamic collage; and third, the image of staring at oneself in the screen of a smartphone playing sounds that represent one’s own sound world (one’s own music), can be linked to the notion of music for oneself, a link that was, as a matter of fact, the concrete motivation i had for integrating “Just Representa­tions?” into CompositionCloud in the first place and organizing a performance of it at Music for Oneself (this time by 5 participants, Mariella Bachmann, Oded Geizhals, Eleni Ralli, Christian Smith, and Lucia Carro Veiga, who were spread around the main corridor of floor -1 of the Jazzcampus of the Musik-Akademie Basel).2 below are several photos from the event, taken by Lilach Hason (click here for more). 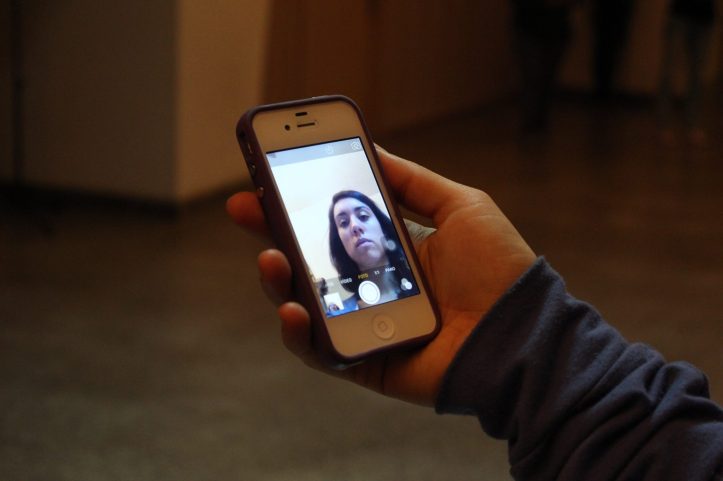 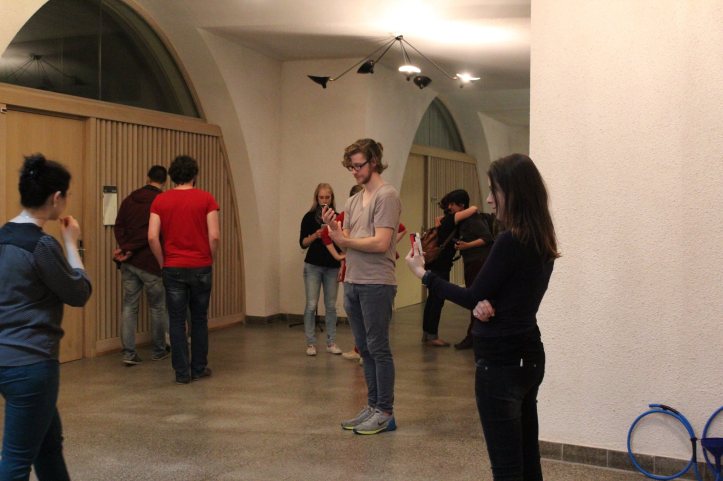 to produce the sound collage, i used the soundtracks of the 100 most popular YouTube videos worldwide on February 20, 2015, as well as 10 field recordings of various nature and city sounds downloaded from https://www.freesound.org.3, 4 10 channels were created (originally intended to be played on 10 different phones), each consisting of random se­quences of 10 to 1010 ms long extracts from a different set of 10 soundtracks, accompanied by a different field recording, arranged in chunks ranging from 2.5 seconds to 17 seconds, and separated by pauses. click here to download the Max patch that was used.

*MUSIC FOR ONESELF v2

CompositionCloud is an abstract rhizomatic space containing different ideas to be used in modular ways to create art, mostly in the realms of sound and music, but not necessarily.

ccloudblog was created to give access to the digital content of CompositionCloud, namely, to its texts, images, sounds, videos, and programs. it is recommended to explore it as if taking a walk in a garden, observing not only the individual ideas, but also the ecology they form.

click here to read more about what CompositionCloud is.

Who is Goni Peles?

Goni Peles (b. 1988) is a composer based in Bristol, UK, undertaking a PhD in Composition at Bath Spa University under the supervision of James Saunders. he holds two Master’s degrees in Composition and Music Theory from the Hochschule für Musik Basel, where he studied with Caspar Johannes Walter and Jakob Ullmann, and a B.Mus. in Composition from the Buchmann-Mehta School of Music (Tel Aviv University), where he studied with Dan Yuhas. he completed a 2-year course in sound and music production at BPM College and produced trance and electronic music when he was a teenager.